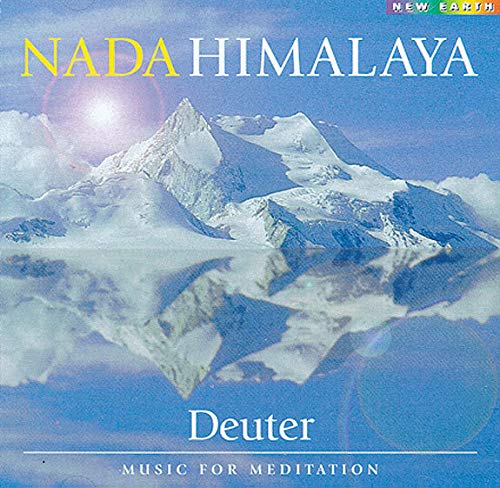 Deuters masterful meditation music echoes the pristine essence of a Himalayan retreat by integrating Tibetan bells and bowls, chimes, and the natural sounds of a mountain stream in Nada Himalaya. Expanding reverberations and overtones meld in perfect harmony. Powerfully meditative and a distinct departure would be the two apt descriptions for Deuters new Nada Himalya. While his past works, like Nirvana Road or Land of Enchantment were crafty blendings of guitars, recorders, lively percussion, and spacious flowing synths, youll find none of those instruments here. Instead, gentle sounds of Tibetan bells and bowls, chimes and the sounds of mountain streams float like white clouds in the Himalayas. These sound vibrations can literally change the environment, inviting silence from the inside. A timeless space of harmonics and subtle vibrations await those who enter the here and now of these spiritual sounds, resonating from the heights and depths of simple breath and existence.Common Ground

Born in 1945 in postwar Germany, Deuter studied the flute, taught himself guitar and just about every instrument he could get his hands on, though it wasn't until after a near-fatal car crash in his early twenties that he decided to pursue a career in music. His first release in 1970, simply entitled "D," was to become a modernist classic. "D" marked the beginning of Deuter's spiritual and musical journey, ostensibly paving the way for a new genre of music known as "New Age," which combined acoustic and electronic elements with ethnic instrumentation and nature sounds, such as whale and bird song, the open sea, wind in the trees, et cetera.

Over the years, Deuter has continued learn and master a vast array of instruments, including the drums, the shakuhachi flute, the koto, sitar, Tibetan singing bowls, santoor, bhuzuki, piano and keyboard. He's recorded and released over 60 albums and has sold too many records to count. All the while, Deuter has never ceased to explore new frequencies and resonances. "One thing that is important for me is that I love dancing on the edge of the unknown--to play around and open doors I haven't walked through before," says Deuter. It is this very outlook that has kept him at the forefront of musical evolution for over 35 years.

Deuter lives and works in the mountains outside of Santa Fe New Mexico, creating the contemplative, healing music he's become known for today. His most recent albums include "East of the Full Moon," two bestselling recordings of Tibetan singing bowls, called "Nada Himalaya", as well as 2003's "Earth Blue," a collaboration with Volkswagen for their Autostadt exhibition in Wolfsburg, Germany.

Make the best use of Scientific Research and information from our 700+ leading-edge peer reviewed, Open Access Journals that operates with the help of 50,000+ Editorial Board Members and esteemed reviewers and 1000+ Scientific associations in Medical, Clinical, Pharmaceutical, Engineering, Technology and Management Fields

Our group has propounded many international Scientific Alliance activities in collaboration with numerous international academic and research institutions. It has already signed agreements with more than 1000 scientific associations from across the world to propagate open access publication on various scientific disciplines.

We are an Open Access publisher and international conference Organizer. We own and operate 700+ peer-reviewed clinical, medical, life sciences, engineering, and management journals and hosts 3000+ scholarly conferences per year in the fields of clinical, medical, pharmaceutical, life sciences, business, engineering and technology. Our journals have more than 15 million readers and our conferences bring together internationally renowned speakers and scientists to create exciting and memorable events, filled with lively interactive sessions and world-class exhibitions and poster presentations. Join us!

The publisher is always open to constructive feedback. We pride ourselves on our commitment to serving the Open Access community and work hard to become better at what we do. We invite your concerns, questions, and complaints. Contact us at [email protected]. We will get back to you in 24-48 hours. You may also call 1-800-216-6499 (USA Toll Free) or at +1-650-618-9889 and we will return your call in the same time frame.

I was delighted with the speed and efficiency with which my paper was processed. The friendly and personal communications with editorial staff also made the experience extremely pleasant and easy. I should be happy to recommend Journal of Pharmaceutical Care & Health systems to anyone.
Fadi M. Alkhateeb, BSPharm MBA, Ph.D., Director of Assessment, Office of the Dean, Associate Professor of Pharmacy Administration, Texas A&M Health Science Center, USA

The OMICS International has the reputation for quick reviewing and publishing original medical articles. From my personal experience, most of our original medical articles would be published within 3 weeks. Moreover, the editorial boards of most the OMICS International journals have many dedicated and reputed scientists as editorial members. Thus, I am grateful for their assistance and currently review work of other scientists.
Da-Yong Lu Doctor and Associate Professor, Shanghai University, PR China

I have served as an editor for Journal of Nanomedicine & Biotherapeutic Discovery for two years. The journal has an unique aspect covering Nanomedicine and Biotherpeutic discovery, which many journals in the area of Nanomedicine cannot provide at the same time. The publishing process was relatively smooth and quick. The journal is contionously publishing good review and research papers.
Jaeho Lee Nuclear Medicine Department, Clinical Center, National Institutes of Health, USA

I hereby express my great interest in continued service in “Journal of Advanced Techniques in Biology & Medicine” as Editor. My association with the Journal as an Editorial Board member has been an enriching and fulfilling experience. I also appreciate Editor in chief, other Editorial Board members and Journal staffs that works to establish high professional standing.
Dr. Antonio Simone Laganà Department Gynecological, Microbiological and Biomedical Sciences, University of Messina, – Messina (Italy)

I had a very wonderful and satisfying experience with the Journal of Bioprocessing and Biotechniques since last five years. I would definitely consider the journal for future publications. I would highly recommend Journal of Bioprocessing and Biotechniques for your future publication. Also, it has been an honor to work as a member of the editorial board and currently as Editor-in-Chief of the journal. I am enjoying to working with OMICS International.
Prabir K. Mandal Ph.D., Professor of Biology, Edward Waters College, USA